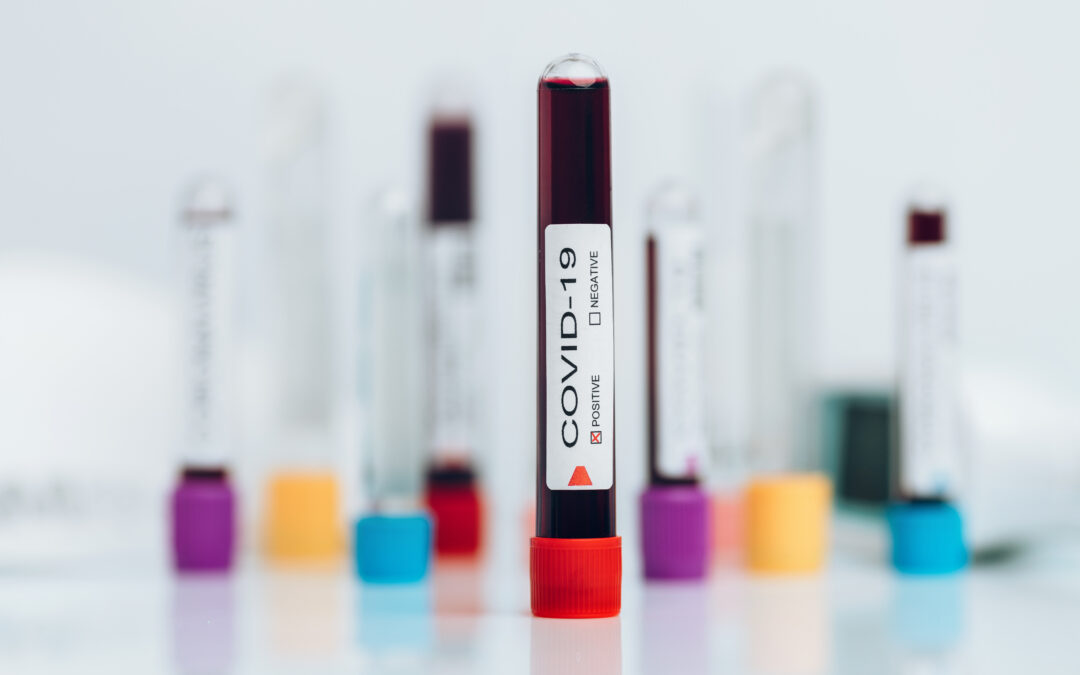 When the pandemic struck full scale in March 2020, it was clear that skilled nursing facilities would be disproportionately affected. LifeScan Laboratories CEO Eliyahu Kutoff knew that the SNFs who made up the majority of the lab’s customer base would need unprecedented support to manage the pending crisis.

It wasn’t long before our LifeScan leadership team realized no one had a plan. The obvious choice, given confusion, fear and the world-wide shortage of supplies–including PPE–would have been to wait for someone else to offer solutions.

“We stepped into action to do whatever we could to support SNFs and businesses as well to face seemingly insurmountable challenges,” says Kutoff

The LifeScan team’s commitment and long hours resulted in our ability to build a full-scale molecular lab in an astonishing three months’ time. This took leadership and vision, as well support and advocacy from partners like the Illinois Department of Health.

We at LifeScan have since processed nearly one million COVID tests, a feat accomplished by only a few of the U.S. laboratories, all of which are much larger than LifeScan Labs in Skokie, Ill. In April we received a Village of Skokie Mayoral Proclamation for our leadership in the region.

“People in nursing homes don’t have the ability to really quarantine themselves or take other precautions that most individuals can, like sheltering in place. We understood the huge need for testing. And I’d love to say it was quick and easy. And it certainly wasn’t, it was an extended process of building a molecular laboratory and getting it right and perfecting it and perfecting it and perfecting it over and over again. LifeScan has led the charge in making sure that anybody who needed a test from the first day of COVID until today got a test. If it wasn’t a simple task. And it wasn’t something that was available to many people in the country. We’re enormously proud of what we’ve done to really support our customers and the entire long-term care population during COVID.”

In May we were awarded a Gold Award from the College of American Pathologists for test results accuracy. What’s so astounding is that we managed to achieve accuracy in spite of the challenge of having the head of our lab stuck overseas for months at the beginning of the pandemic and all the disruption that occurred like any business trying to stay open in 2020-21.

Reflecting on what the team’s achieved, Kutoff says he’s not the least bit surprised by what we managed to build. That’s because at the heart of our mission has always been a commitment to go out of our way to support skilled nursing facilities.

Kutoff says, “Skilled nursing facilities are some of the best people in healthcare. As a lab, it’s always been our focus to make sure that we make their lives easier.”

Logistics planning and a commitment to accuracy have been key factors in our success. “It’s crucial that every part of that system is perfect because close is not good enough. It has to be perfect, and LifeScan has really gone out there and worked with manufacturers across the world and suppliers across the world to really bring the best in class to our laboratory and to long-term care patients and residents here in Chicago.”

Sourcing supplies has been key to the laboratory’s success

Sourcing essential materials has been one of the many challenges during the pandemic. Kutoff says, “Everybody remembers when masks were unavailable. Laboratories require very specific materials, for instance, the water we use is filtered and the consumables that we use have to fit into a certain instrument and what the heavy robotics that LifeScan uses. There are very few manufacturers that make consumables for those instruments. So it was not simple.”

We at LifeScan Labs handled the situation through an iterative process. Kutoff says, “We started buying instruments and using consumables that were available at the time and then trying to acquire the things that we knew we needed to equip our lab and get to the high throughput that we currently have.”

We sourced certain components for the robotics that we use come from Germany, Austria, Switzerland, England and across the globe.

We were able to reach out to some of our standing relationships with the Illinois Department of Public Health and other government offices to advocate for the needs in long-term care.

For example, when we heard that equipment would take six months to arrive, we worked with IDPH to write a letter to Thermo Fisher to put us at the head of the list.

Those three to six months turned into 12 weeks. It wasn’t simple, but it came through.

Kutoff says, “You have to let them know who you’re servicing and why your patients are important. Long-term care has been at the forefront or in the media with COVID. This is why we spoke to all of our suppliers around the world, making sure that they can get us what we need.”

It’s a beautiful lesson on connecting with people and speaking to them about what you’re trying to do to make the world better. We are very proud of our team and the measures we have taken to make it through this ordeal.

Supporting SNFs and businesses with fast, accurate testing has been a feat that meant making fast decisions and staying nimble. Here’s what that’s looked like for the LifeScan team 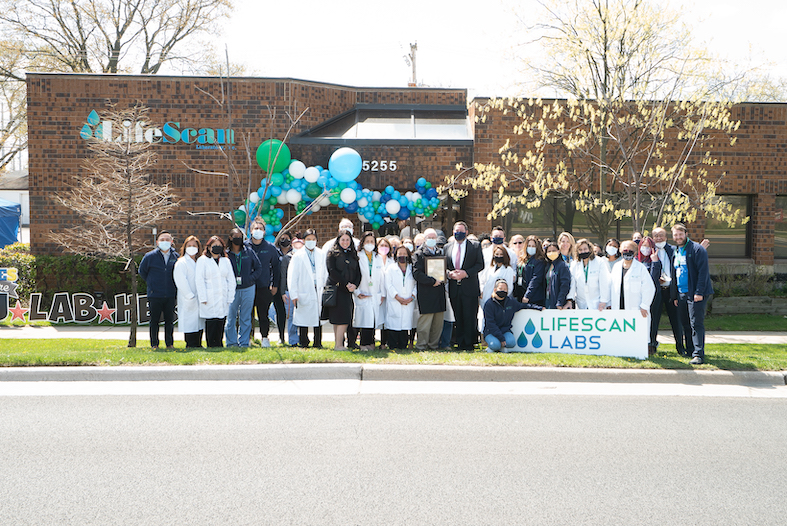 In winter 2020, we started working with national labs that had large capacity to process COVID tests, but there were few collection kits. We bought whatever collection kits we could find and quickly ran out.

Next we determined the iterative process of the different instruments that we needed to make COVID testing happen temporarily and in the future. We ordered sophisticated, automated equipment that allowed for a higher throughput, but there was a two month wait.

Temporarily, we purchased seven figures of instruments and consumables that we knew we were not going to be able to use for more than two months.

We took a big leap for a very narrow period of time, knowing that we’d need to turn everything over, call electricians, install different shelving, and rewrite the workflows and protocols because this is what it took to get through those months.

Team work ensured the lab team was able to succeed

Every day new needs and challenges arose. Comradery, friendship and thinking out of the box helped bring everything together. Kutoff says, “Remembering what it was like in June of 2020, the eye of the storm was not easy on us. We’re grateful to those healthcare heroes who showed up and pulled through every day. We’re glad to be a small part of that and be able to make their life a little easier by getting them access to testing as quickly as we did.”

The details of the process illuminate how precise it must be. Kutoff says, “There are multiple steps to the test and the PCR test is one of the most complicated out there. The test process in the lab from the beginning to end is about six hours. The sample continues on to different instruments, one to extract the DNA, purify the DNA, set up the plates, run the DNA and then they have to be resulted.”

This means that from the time someone walks in the door until the result goes out is about eight hours, and we’ve been improving it.

The speed of our lab mean we could keep up with the frequent testing necessary in long term care facilities. Kutoff says, “We were able to test everyday, every other day or however often the facility needs. It really cuts down on the amount of exposure going on in the facility.”

Even though the cost may seem higher, the benefits of proper testing far outweigh the costs. Kutoff says,  “Now that the government changed the regulations that every positive kicks in a two week protocol, they have to test every patient and every employee in the facility for two weeks. The cost and the hassle of those false positives have gone way up. Several facilities that were using rapid tests or point of care tests six months ago or a year ago to augment the PCR testing now are saying that one rapid positive costs some two weeks and hundreds of hours of difficulty working with the local governments.They’d much prefer to do everything PCR so they can get that much more highly accurate test.”

Some of the changes LifeScan Labs has seen during the pandemic are here to stay. Kutoff says, “Looking at the new government regulations, there are outbreak protocols that require two weeks of testing for every positive. That will remain in place for many years.”

How a local lab served a national population

Building up the lab’s capacity to serve the Chicagoland region meant there was a growing opportunity to ship test kits nationally. Word spread about our quick turnaround and ways we make the process of gathering test samples easier for nursing staff by using barcodes.

Kutoff says, “In the last three months, we’ve had customers from Boston, from Ohio, South Dakota, all over the country calling us up and asking how quickly something can be sent by mail? And I say, mail? We’ve got same day flights. FedEx comes, picks it up, puts it on an airplane, drops it at O’Hare two, three hours later, drives it to our facility from the moment that leaves the nursing home to the moment it arrives in the lab from Boston or from Florida, it could be as short as five or six hours.”

This makes a major impact. “The ability to make the nurses’ lives easier by giving them an easier way to collect samples. The ability to very often send staff into the facility to collect the swabs or to do the COVID swabbing for the facility. The ability to have this extremely precise test that they can rely on completely has made waves in the industry. And we’re proud to have done it.” 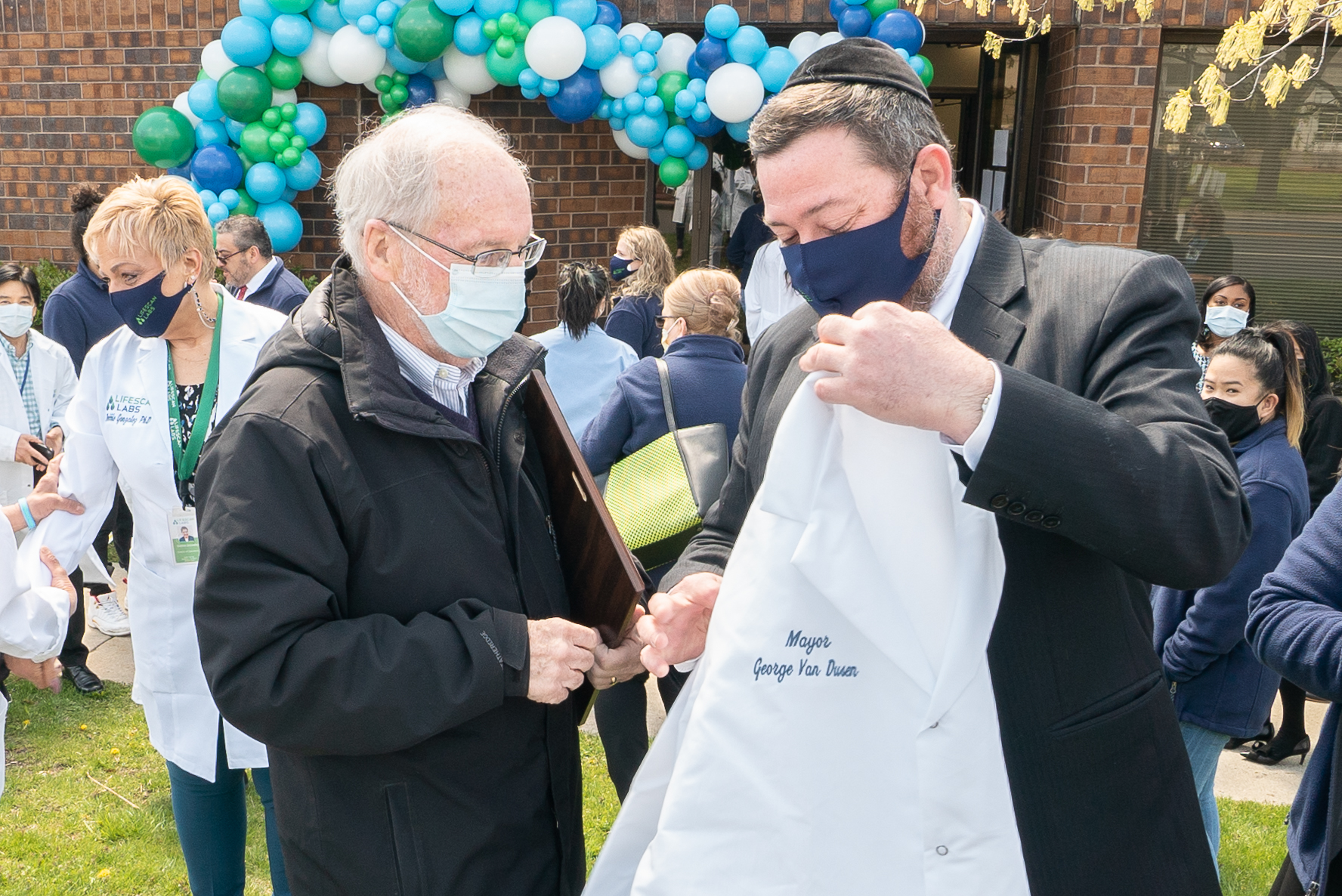 Our services span beyond the scope of testing. Kutoff shares, “COVID is a virus living in a body and we know there’s more than that. There’s flu and there’s e-coli, and there’s all kinds of viruses among long-term care patients, whether they’re urinary tract infections or respiratory infections or wound infections.”

“Traditionally those tests have always been done with a culture. A culture collected will be put on some type of growth. That medium takes three days to get a result in a molecular test. We can do the same thing in 12 hours. What we find is that particularly in acute facilities where the infection is very problematic for the patient, that time difference makes a very significant difference in the patient’s prognosis,” he says.

There are a number of benefits to faster testing results. “We find that a lot of the antibiotics that doctors give before they have clear answers are extremely toxic and extremely expensive. We’re able to decrease the amount of doses of those antibiotics that the doctors have to give by getting them an answer in 12 hours. instead of three days. Everybody wins.”

Kutoff says, “I find the facilities really appreciate our rapid response COVID swabbing team. So we’ve hired about 50 to 75 nurses in Illinois, Indiana, Wisconsin and the facility will call us up and tell us there’s an outbreak. Then, we’ll send a team to go out there, collect the information, collect the swabs, get it back to Chicago and get them answers straight away. We understand the nurses in the facilities have a tremendous amount of daily work to do.”

In order to make this possible, Kutoff says, “No one person can get everything done without a very strong team of committed people, willing to do what it takes and spending the hours getting it done. None of it would have happened without them, and we’re very proud of them.”